There are many benefits of ear candling. It has helped people with sinus congestion, colds, ear aches and infections, candida, headaches, lymphatic congestion, sore throats, mucus, sinus infections, balance and equilibrium. It is safe, simple and natural. It is a soothing experience that reduces stress and tension and also sharpens mental functions.

The History Of Ear Candling 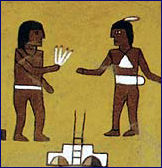 The ears are a part of our bodies that are often misunderstood and neglected. Usually we only become aware of our ears when we we have a problem yet ear candling has a long well respected history. In ancient times the process was described as "coning". Cone shaped instruments made from pottery clay were used. The glazed pottery cones had a double helix carved inside to create a downward spiral energy flow of the smoke and heated air. This would carry the burning herbs down into the ear canal. The action is a counter clockwise flow caused by the vacuum action of the cone. The smoke and the heat cleansed the ear canal and pulled the debris out by vacuum as the air was burned out the ear canal.

This process was used in China, India, Tibet, Egypt, the Mayan, Aztec and American Indian Cultures. History dates it back to Atlantis and Lemuria. Cleansing cones or candles are an ancient, universal form of therapy used by nations all around the globe. Some form of wax or some burnable substance was used as the carrier in the cones. Some Indian tribes simply blow herbal smoke down into the ear canal through a cone shaped object, many times it was wrapped up newspaper. Many cultures considered coning a spiritual practice for clearing the mind and senses. They claimed it cleared the mind and body so you could meditate and open up your sensitivity.

Original style coning by the Egyptians utilized hollow reeds. Today, candling uses a hollow disposable candle, much like a large straw. Although they differ, most candles are made of 100% unbleached cotton (muslin) fabric coated with purified paraffins and/or bees' wax. The spiral roll built into the candles during production creates the same effect as the pottery cones. There are also some specialty candles which contain herbs and essential oils.

The Way It Works

The basic premise in ear candling is the spiral of the cone causes the smoke to be pulled down in to the ear canal. This causes the ear canal to warm up and loosen the wax and any other material. As it heats it up, the candle causes a suction by creating a vacuum in the ear canal. Air is drawn up from the Eustachian tube into the middle ear then through the porous membrane out into the outer ear. The heat and the vacuum draw out the wax and other materials from the ear canal into the base of the candle. As it burns down you will hear a lot of cracking and hissing which is the process of removing the wax etc. The warmth feels soothing and relaxing during the process. Ear Oil placed in the ear after candling with cotton to cover will protect from further infections from bacteria, yeast's etc.

The healing properties of the Ear Candle has its foundation in two primary physical actions. Firstly, the slight under pressure (the chimney effect) inside the Ear Candle and the vibration of the rising air column serve to gently massage the ear drum and promote secretion in the frontal and paranasal sinuses. This has an immediate subjective effect of regulating and balancing ear pressure. Users often describe a soothing, light sensation in the ear and head area. Secondly, the locally applied warmth stimulates vascularization, invigorates the immune system and reinforces the flow of lymph. At the same time, important acupuncture points and reflex zones are stimulated.

How Can Ear Candling Help 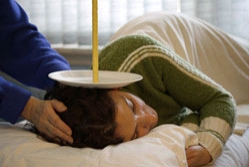 Ear candling is a holistic procedure used to remove excess wax, draw out toxins and pollutants, cleanse the sinus cavities, improve hearing and other senses and revitalize the nerve endings. It is also thought to have a psychic, emotional and spiritual impact on a person as it draws out negative toxins and revives the energy flows throughout the body.

Because of all the intricate crevices in the ear, unbelievable amounts of debris can accumulate. This buildup creates a breeding ground for problems and can also interfere with correct hearing. Impacted wax can build up against ear ducts and can also block reception of incoming sound waves. This lifetime accumulation may explain some of the hearing problems we develop as we age. Yeasts, allergies or just wax build-up removed from the ear canal regularly will restore hearing, relieve tension or pressure in the ear and sometimes relieve other symptoms not consciously connected with the ear condition before the process. The moist warm dark conditions in the ear cause fast growth of many organisms. If excess ear wax blocks the ear it can cause pressure build-up from various organisms.

Clinical studies show that candida (yeast) often becomes established in the middle ear after one or two episodes of infection where an antibiotic has been used. Candling is believed to remove candida, yeasts, fungus, and remnants of past infections. The types of bacteria we currently fight in our ears include Streptococcus pneumonia, Staphylococcus aureus, Anaerobic bacteria, and Influenza A and B. Ear aches can be caused by mucus blown into the ear from the Eustachian tube. Ear candling will quite often release the pressure and relieve the pain.Some of the benefits those undergoing ear candling have experienced include:

Beneficial relief may be obtained from ear candling for the following conditions:

What To Expect During Your Session

You will lie comfortably on your side on a padded massage-type table resting your head on a pillow as the candling is performed.Hollow cones 9” to 10” in length and ¼” to ½” in diameter made from spiraled strips of cotton dipped in either bee’s wax or paraffin are used. The tapered end of the cone is gently placed in the ear. The other end is lit and the heat from the low-burning flame creates a vacuum-pulling effect. For your safety, a plate separates the burning end from your head to prevent any drippage of candle residue. During the treatment, a stimulating, as well as calming, head massage accelerates the removal of harmful debris and adds warmth to the experience. Periodically, the burned end will be cut back. When the candle burns down to about 2”, the process is them repeated for the opposite ear. Candling will take approximately 15-20 minutes per ear depending on the type of candle being used. During the treatment, you will normally hear some crackling, hissing and the "suction" sounds much like the gentle hum one hears when a seashell is placed against the ear.

Upon completion, an oil is swabbed in the ear with cotton to help protect from further infections from bacteria, yeast. etc. For the first 24 hours after candling, it is best to protect the ears from wind, cold, and excessive amounts of water. Within 24 hours the normal production of wax will again protect the ear. The candles will then be cut open to reveal the toxins deposited at the base. Laboratory analysis of ear candling results has shown it may contain residues of wax with bacteria, fungus, candida, parasites, hair and other debris.

Who Is Ear Candling Suitable For?

Young and old alike experience this process as a soothing, painless, simple therapy, which invokes deep relaxation and healing. At  Health Dynamics, I follow all recommended holistic community practices to insure the safety and comfort of the client and make the experience a pleasurable one.